Wow, I can't believe it's been three months since I last posted!  I have been a bit slack with my Sylvanians in the interim, just due to real life stuff taking precedence - it's been a busy time for us.  I haven't forgotten about my Sylvanians - some of them even came with us on a recent holiday (but more on that another day!), and I have a few other photos and stories I hope to get onto soon.

Today though, I have an entry for last month's Creative Challenge on the forum (better late than never, right?)  The prompt was "Summer Holidays", but just like here in Australia, the residents of Macadamia Grove are currently experiencing some chilly Winter weather.  It seems that some of them at least are getting rather sick of it... 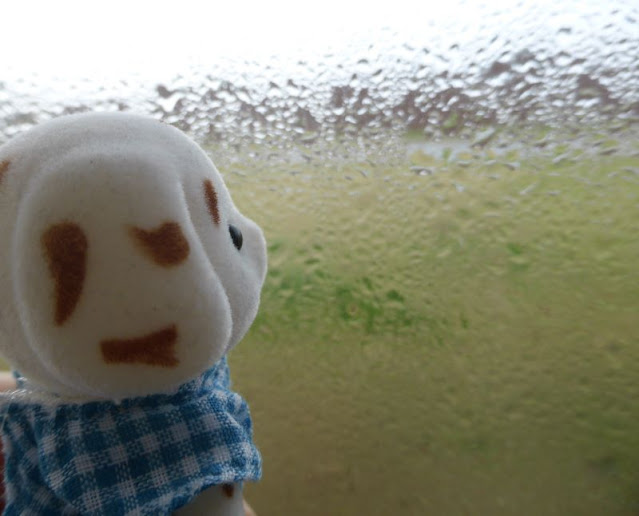 Zac Patches looked gloomily out the window as the rain beat down outside.  He sighed loudly.

"What's up with you?" asked his sister Sarah, glancing up from her book.

It wasn't fair.  The school holidays had begun a whole three days ago, and it had rained on all three of those days.  Zac didn't much care about being cold, but he hated being cooped up inside all the time.

"I mean what's the point of having holidays if you can't go out and play?" he demanded.

Sarah shrugged.  "It won't rain forever," she said.  "Why don't you read a book or something?"

Zac looked highly affronted by this suggestion.  He did not share his sister's enthusiasm for books.

"Look at one of the photo albums then," suggested Sarah.  "You like doing that - what about the one from Australia?  Or - ooh, I know!  This one."  She handed him a big photo album.

"This one's got the Sylvania photos in it," said Zac.  "It's not as interesting."

Sarah reached over and opened the album to a particular page.  "Not even these ones?"

Zac gave her a look.  "Oh, very funny," he said, but a little smile did tug at the corner of his mouth.  Sarah had given him the photos of their last Summer holiday to look at.  They had spent a week at Starlight Cape, enjoying the beach and the endless sunshine. 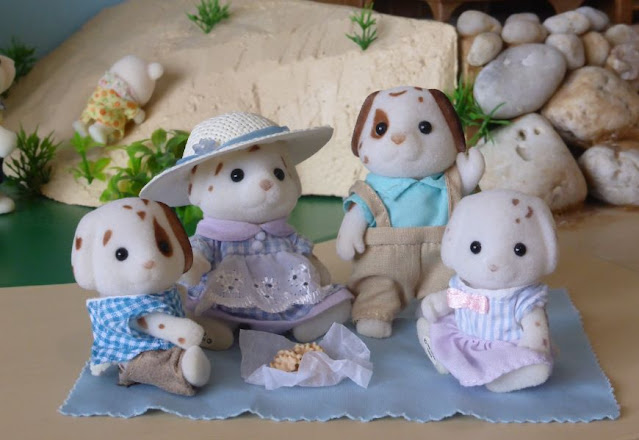 "Looks like we'd been to the Fish & Chip shop that day," said Sarah, peering over.

"Those chips were so good," said Zac.  "But the ice creams were even better.  Remember that chocolate one I got?  There should be a photo... Yeah, here it is!" 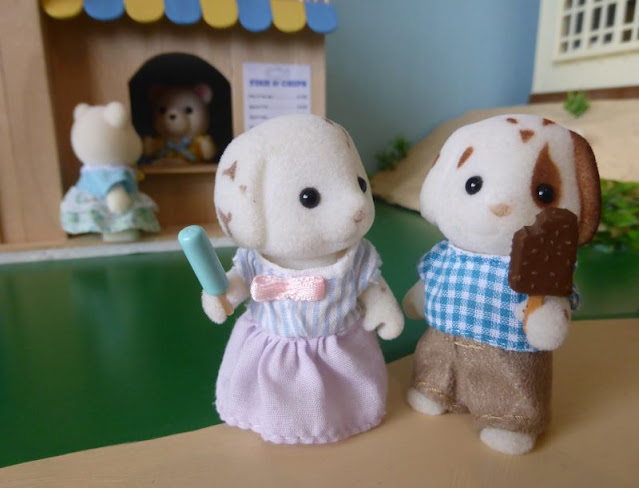 "They were awesome," he sighed, reminiscing.

"Oh look at this one.  You were such a rat," said Sarah.  "You kept on trying to splash me.  I didn't know Mum had taken this photo until afterward." 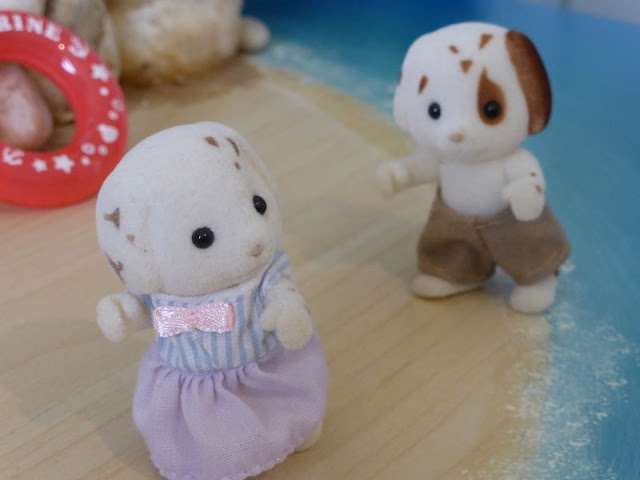 "I wasn't trying to splash you," Zac protested.

"It was a fun holiday.  We met nice people there too.  That rabbit girl was nice - Cherrie.  I liked her," said Sarah.  "I don't see a proper picture of her - just in the background of this one of you." 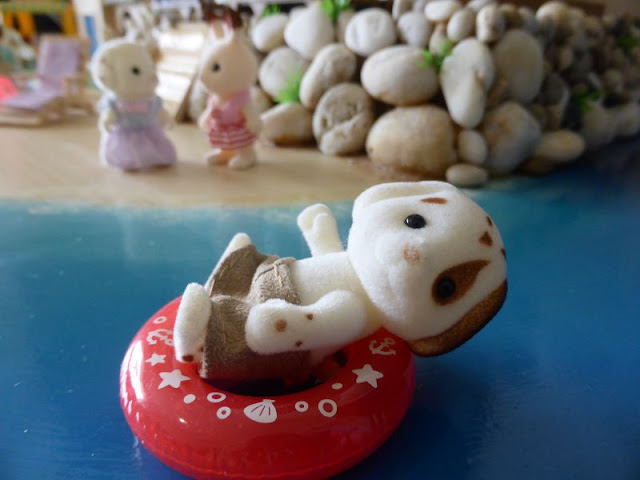 "Meh - she was just a girl," Zac said dismissively.

"Excuse me?  Honey Chocolat is just a girl, too," Sarah pointed out.  Honey was one of Zac's school friends.

"Yeah, but Honey is fun," said Zac.  "Anyway, Cherrie was too old to play with."

Sarah rolled her eyes.  "Well I think she was very nice.  And anyway, that is her float you were on, if I am not mistaken.  It was very kind of her to lend it to you."

"It was a fun holiday," Sarah mused.  "I wonder if we'll go back next Summer?"

"Hope so," her brother replied.  He wandered over to the bookshelf and pulled out another photo album.  "Hey, look. Italy."

"Zac, the rain's stopped.  Mum would probably let you go out now," she said, picking her book back up and settling into a comfy chair.

"Hmmm?  Oh, yeah... okay..." Zac mumbled absently, turning the pages of another album.  Sarah smiled to herself.  There was nothing her brother liked more than looking at their family photos - well, apart from running around making mischief with his friends, of course.  She guessed it was just the nature of little brothers to be a pain sometimes, but Zac was pretty fun, mostly.  She would never have admitted it, but she often missed him when she was away at school.  She was looking forward to next Summer, too. 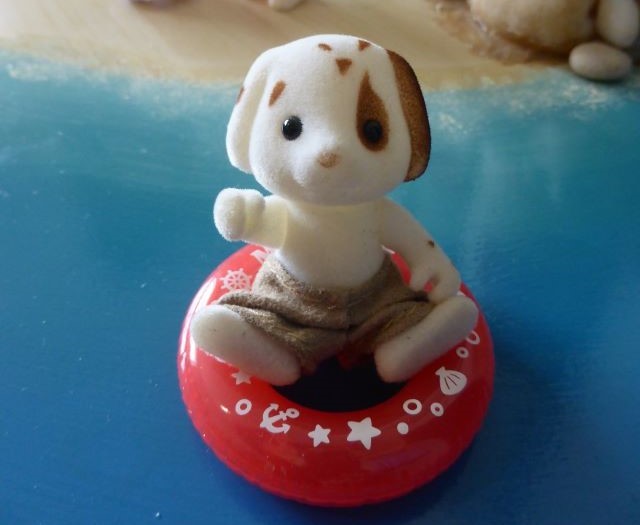 Today I would like to introduce you to a new family.  This family came to me in an unusual way.  Some time ago, there was a competition on the Sylvanian Families Collectors Forum.  I didn't win, but a few days later I received a message from one of the people who did.  Tenchibaka (who is a fantastic miniature-food maker by the way, in addition to being one of the most active forum members) said that instead of ordering something with the prize (a Sylvanian Storekeepers voucher), they had decided to give it to me.  What a lovely thing to do!  I was very surprised, and grateful.
Once I had established that Tenchibaka was really, really sure about this, I ordered myself a lovely little family of huskies - and here they are! 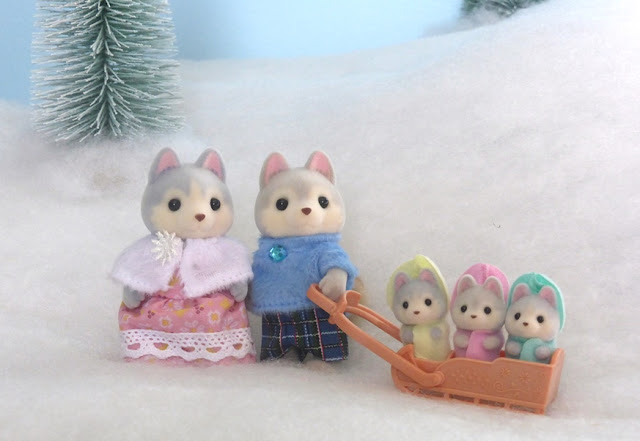 I decided to rename everyone in this family, starting with the surname - the offical surname for this family is just "Husky", which I thought a bit odd.  Kind of like a person's last name being "Human".  Then I happened to discover that there is a tiny town in Alaska named Coldfoot.  Well that sounded perfect for these little fuzzies!
The Coldfoot family live in a comfortable log cabin in the foothills of the mountains, a little way out of Macadamia Grove.  Whilst their home is not technically in the village, the Coldfoots are considered by everyone to be very much part of the community.
Together, Wolfgang and Juneau Coldfoot run a business supplying ice to the local villagers - both in edible form for drinks etc, and in large blocks for food storage (most homes in Macadamia Grove do not have electricity, so iceboxes are much in use, rather than the more modern refrigerators commonly seen in Town).
Wolfgang is the one who cuts and collects the ice from higher up the mountain, and he enjoys his job immensely.  The ice is stored in a special coldroom until it is needed, at which point it is transported down to the village by sled.  Juneau's job is to take the orders, and make sure the correct products are delivered to the customers.
The most important things in their lives though, are not cold at all - they are very warm and furry and wriggly!  The baby triplets - Katya, Luka, and Echo - were very excited today to be taken for a ride in their very own brand new sled! 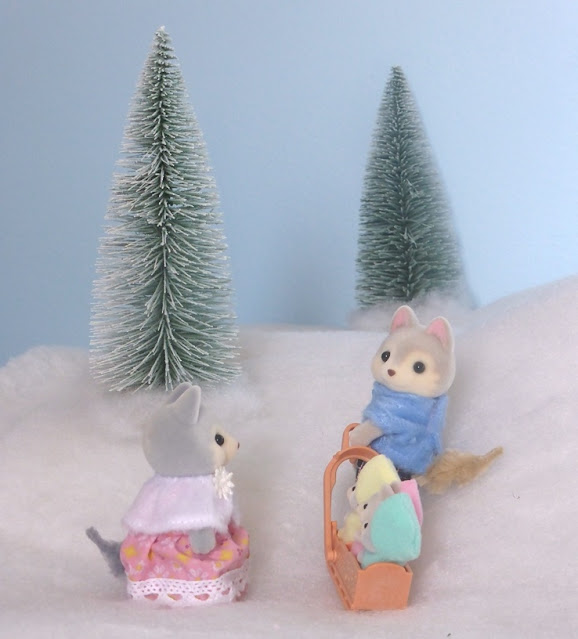 "Over the hill we go!" shouted Wolfgang happily, and Juneau laughed as the babies yipped excitedly.
The babies had not seen such thick snow before, as they had never travelled this far up the mountain.  It was only early Autumn in Macadamia Grove, and also at their home, so there was no snow there.  Further around the mountain, outside the strange seasonal anomaly that existed in this part of Sylvania, Spring was beginning.  Soon it would be time for one final delivery from the Summer coldstore there, and to begin storing ice at the main coldstore closer to home.  Juneau was glad, as it meant Wolfgang would be able to spend more time with the baby puppies.
After she took a turn pulling the puppies around in their sled, Juneau heard a sneaking sort of noise behind her... 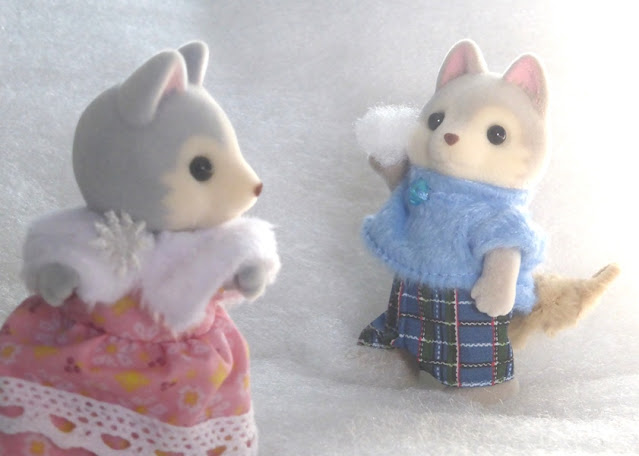 "Snowball fight!" cried Wolfgang.  Juneau let out a little shriek, and immediately returned fire with a snowball of her own.  The babies watched, wide-eyed and giggling.
"Won't it be fun when they're old enough to join in?" Juneau laughed.
"Yes - but it's pretty fun now, too," said Wolfgang with a smile, and gathered them all in a big family hug. 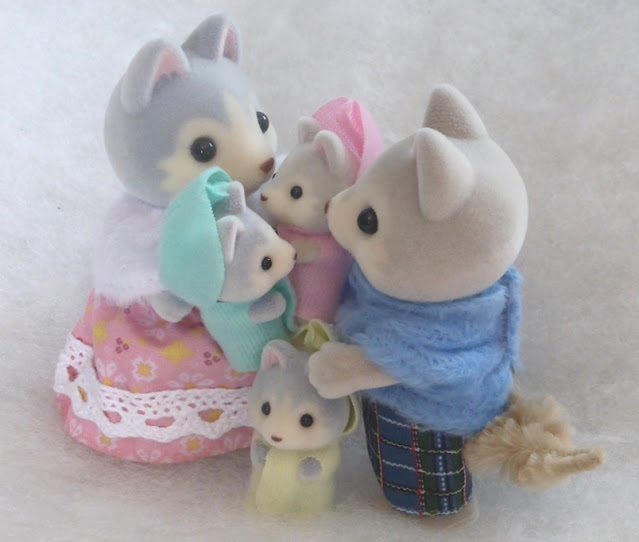 Thank you again Tenchibaka for enabling the Coldfoots to move to Macadamia Grove!  They can also be found on our Meet The Families page now.  :)
Posted by GreyRabbit at 11:37 pm 10 comments:

The Easter Bunny and all his helpers have been very busy getting ready for Sunday, as we can see from this quick peep into his workshop! 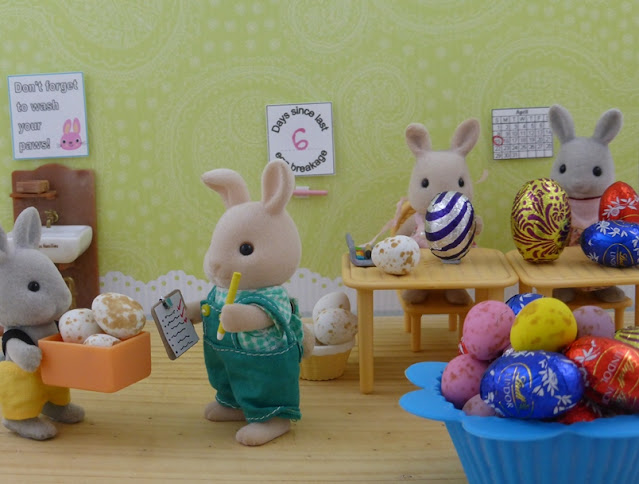 Happy Easter everyone!  Whatever your beliefs, we hope you all get to spend some time with family or friends this long weekend (and eat a bit of chocolate, too!)
Posted by GreyRabbit at 12:30 am No comments:

Hello there, we are GreyRabbit and Caitlyn Hazelnut. Welcome to Sylvanian Sunshine!
GreyRabbit lives in Western Australia with her lovely husband and high-school-aged daughter. Her interest in Sylvanian Families began way back in the 80's, when she had the family of grey rabbits. Now, she has many more - and she is lucky enough to share this hobby - and this blog - with her daughter!
Caitlyn Hazelnut is GreyRabbit's daughter. Her collection started when she inherited GreyRabbit's old Sylvanians, and it has been growing ever since.
Our main village is Macadamia Grove, although some of our Sylvanians live in other places nearby.
We hope you enjoy reading about them.

Other Fun Places to Visit